Our puppies are now 9 days old and developing well.

Mary is a good mother and nurtures her puppies in a very good manner. I am very happy about her. The puppies are gaining good weight. 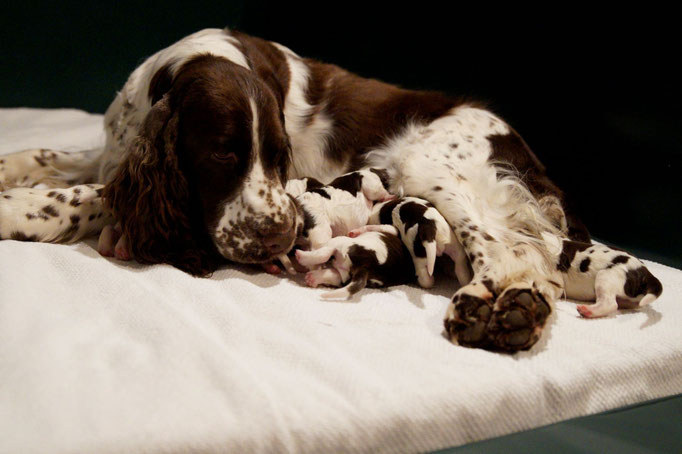 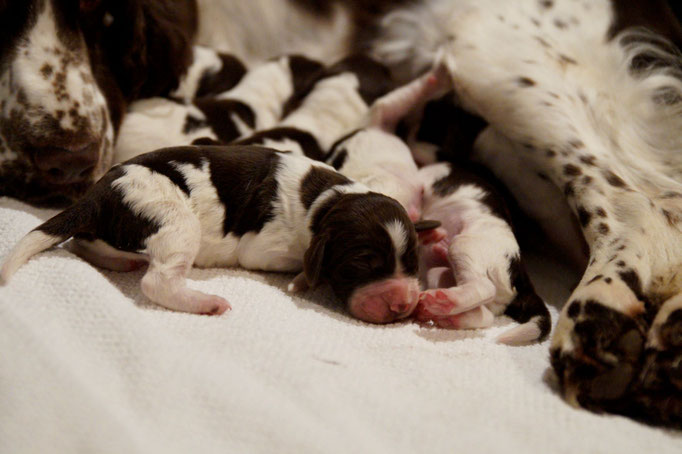 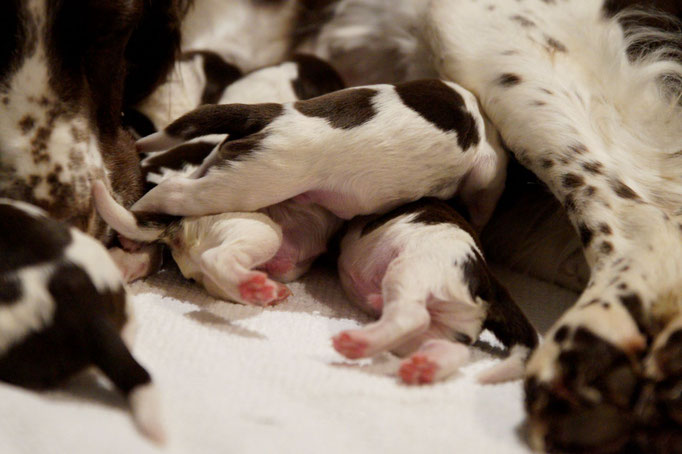 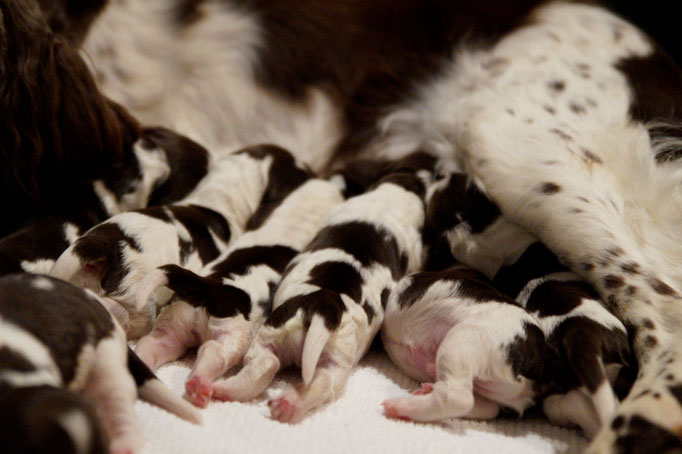 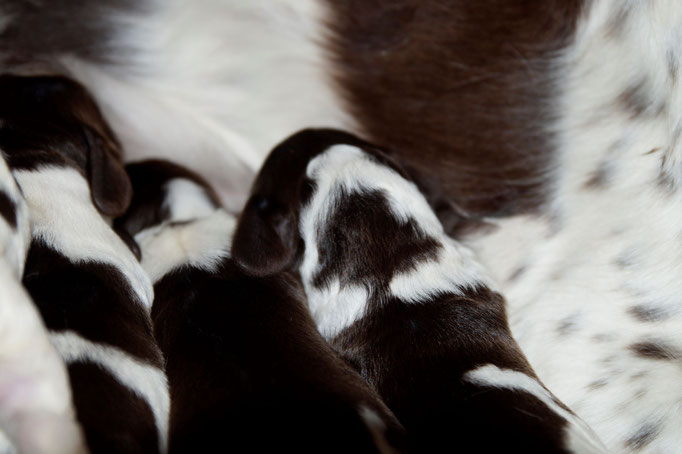 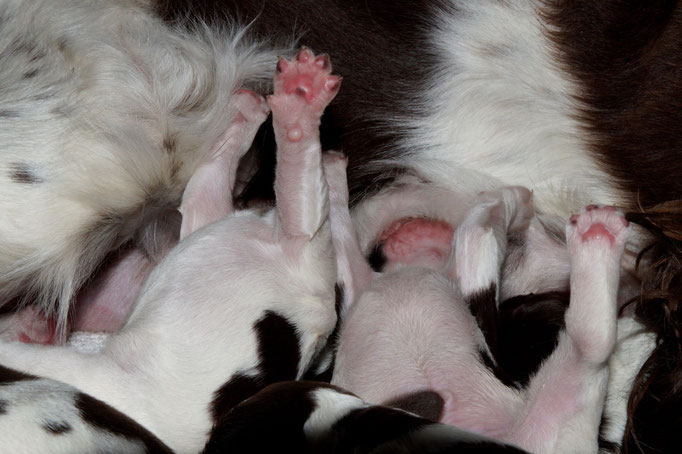 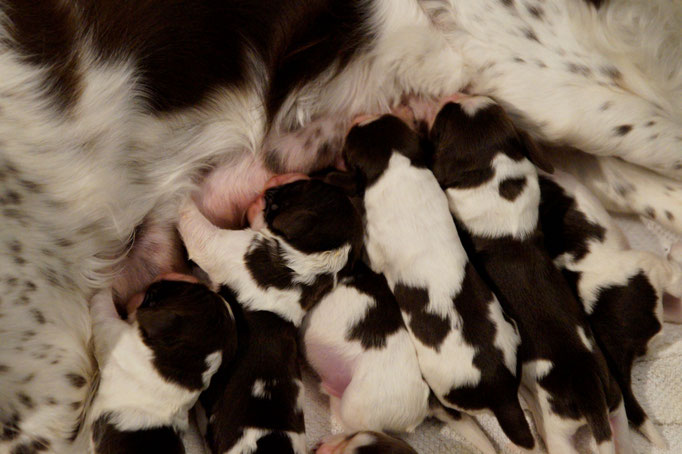 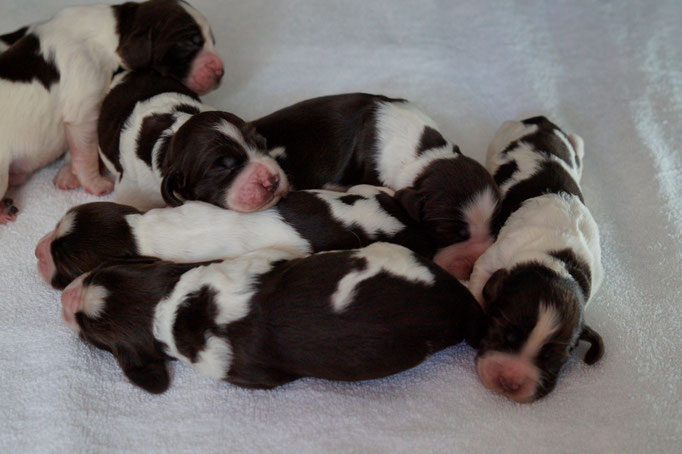 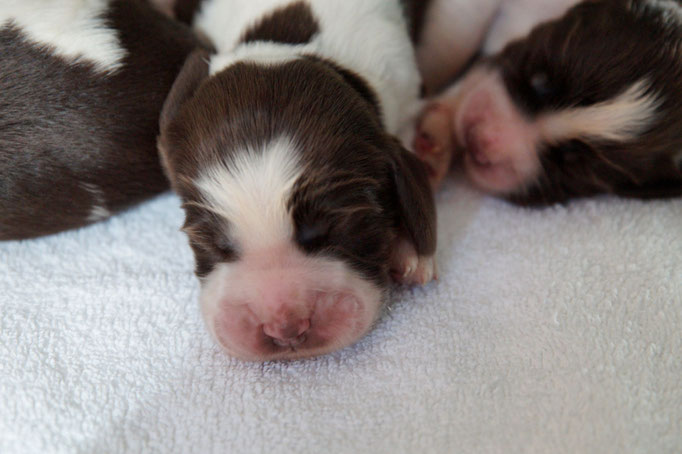 We have seven puppies, five boys and two girls. They are all liver-white, one boy has tan.

This time our mating trip led us with "Queen Mary vom Belauer See" to Warsaw, the capitol of Poland.

As I would love to have a good selection of puppies in this litter, I decided to not only use one male, but to apply for a double mating with the Breed Club. The breeding commission of the Jagdspaniel Klub e.V. approved for a double mating. This is the first officially approved double mating of an English Springer Spaniel in Germany.

In 2018 I have done the same with a Field Spaniel bitch. She was also the first in Germany. She was mated by two males in the UK. Unfortunately we had only one puppy. Nevertheless it was worth! He is now a very successful male in the UK and great stud dog with very pleasing offspring. I am lucky to still co-own him.

Mary has now been mated by "Charlescroft Cover Up" (James) and "One Step Behind You Avendesora Poland" (Clyde).

Last year I have been interested to use a litter brother of James for another bitch. Unfortunately this male wasn't used as a stud dog any longer. In 2014 I visited the breeder of Kennel "Charlescroft", Linda Lindmark, and met "Charlescroft Soho", the mother of James. She is a beautiful bitch with a wonderful temperament. She had a brilliant show career.

James as well as Clyde are worked or have been worked in the woods and fields for hunting and showed great working ability. Mary has also passed a hunting test in Germany.

Next year I plan to show Queen Mary. Until this spring she was in co-ownership and the co-owner she was living with is not at all interested in shows. I am sure, Mary will do really well in the show ring. She got a great critique of two the two judges who approved her for breeding.

If all goes according to plan, Mary will have her puppies around September 21st, 2021. There will be a DNA test in due time to find out, which puppy belongs to which Sire.

You will find more information about Queen Mary on her own Webpage. Just click on her name above and you will be directed. 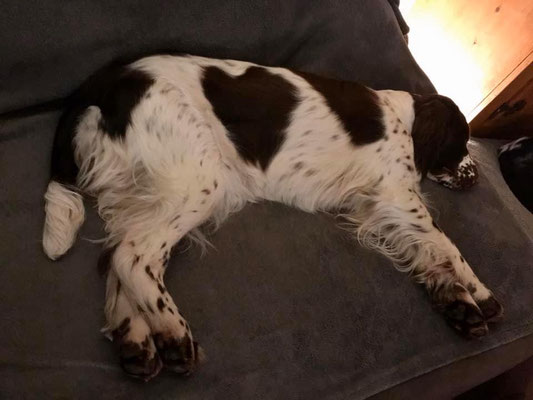 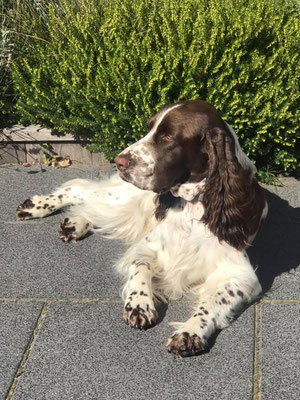 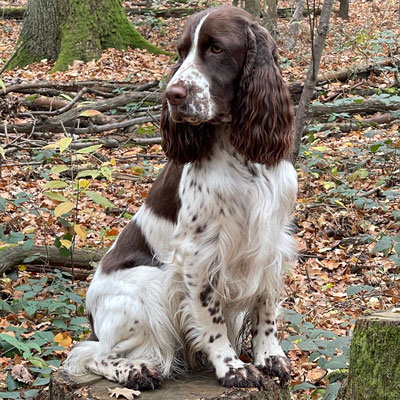 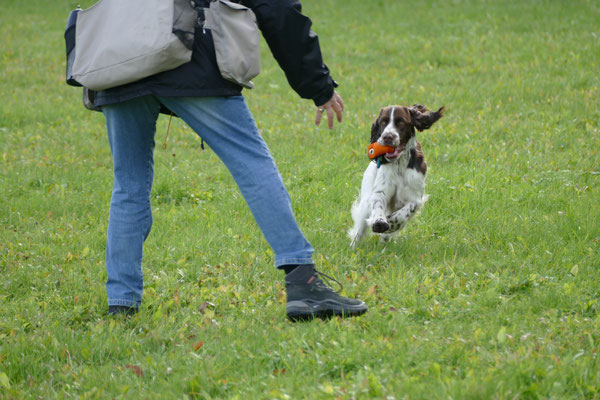 Following you can see a couple more photos of James. Copyright of the photos has  Justyna Kaminska, who kindly allowed me to use them.

Following you will find the pedigree of the expected combination number 1. COI of this combination is 3,64 % and ALC is  90,32 % over 5 generations!

The Sire of the male "Mompesson Escourt" is also found on the Dam's line in the fourth generation.

"One Step Behind You Avendesora Poland"

In the gallery you can see a few more photos of Clyde. Copyright of the photos has Justyna Kaminska, who kindly allowed me to use them for my website. 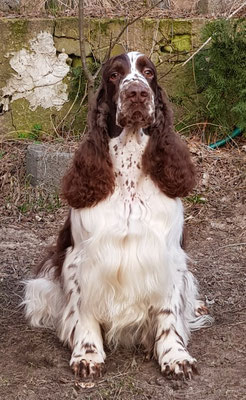 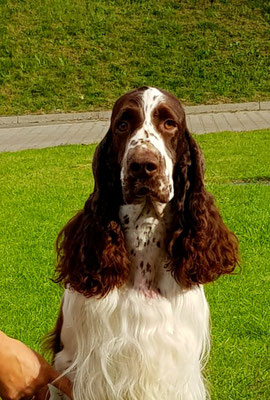 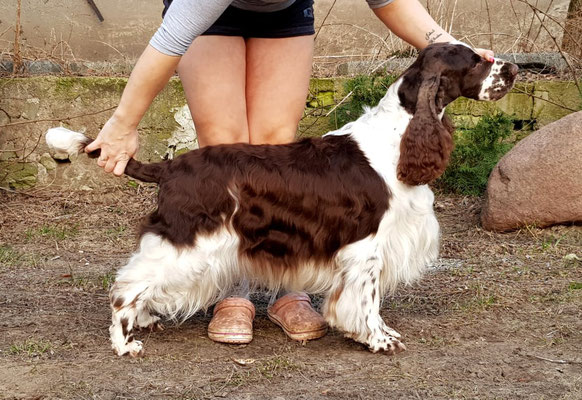 Following you will find the pedigree of the expected combination number 2. COI of this combination is 1,71 % and ALC is  95,16 % over 5 generations!

The grandfather of the Sire "Mompesson Escourt" is also found on the Dam's line in the fourth generation.

In case you are seriously interested in a puppy of my breeding please send your inquiry per eMail to ulf.baumann@springer-spaniels.de