Vicky has been bred in Sweden. It took about two years until we have been able to get a Field Spaniel puppy as I wanted to get a puppy a breeder would Keep for himself or herself. First I tried to import from the UK but we were not lucky as the right puppy was not born. Then I tried my luck in Sweden and Maria Köhlström gave us a puppy.

Vicky is just a wonderful dog and we are very lucky to have her. She is very special and a true character.

"20 months, has a lot of quality, all over alot of nobility, head with typical noble expression, eyes with very melting expression and  "High Society", lips from nose to neck in one line, very nice ears, correct length of legs, very correct in chest, correct elbows, correct pastern, nice broad thigh, strong muscles, while moving very typical for the breed, noble and pride."

Vicky with some of her siblings and a half sister and her father Törnskogens Tom Timmerman at Field Specialen of the Field Klubben in Sweden, July 19th, 2014 atMedivi Brunn. The offspring group was placed first!

At Field Specialen 2014 in Sweden Vicky "Winterbourne Move On To Belauer See" wins Intermediate Class and is placed second of all bitches!

On July 20th, 2014 Vicky wins her class at International Show in Askersund, Sweden,she gets "Excellent" with CK (Champion-Quality), CAC and is second best bitch with Res. CACIB.

Vicky has grown into a beautiful lady. She is not only successful at Shows but also a good working dog. She loves Dummy training... 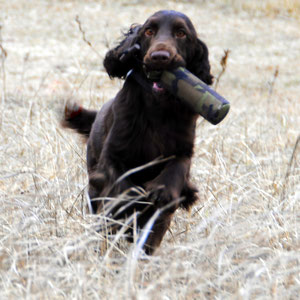 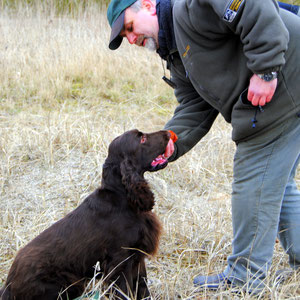 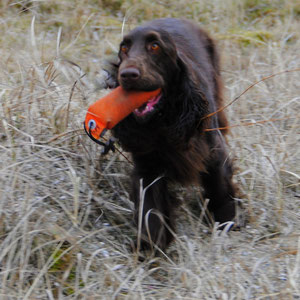