Dorothy is our newest addition  to the pack from USA. The thought to Import one day a Field Spaniel from the States came very early when I started to invest into this breed. My idea is to have through an import of US-lines more opportunities because of the limited genepool of the breed. I believe that more exchange between countries and continents needs to happen within the breed. Because of this I started already years ago to network with breeders in the US and watched their breeding from a distance.

After a while I made the decision that it should be a puppy from Kennel SandsCape of Corrinne A. Dooley and Nichole Dooley-Bunch. A few potential matings were discussed and I decided for the combination of Dorothys litter.

On Christmas Eve, December 24th, 2016 Dorothy was born in a litter of six puppies, all bitches. Four of them were liver tan, two liver. As I didn't want that Dorothy will be docked we had to decide at the age of four days which puppy will be ours. It has been a long night until Nichole and I made the decision which one will go to Germany. A difficult decision, but as it seems a good one!

I flew to the US to pick up Dorothy. Before the flight to Germany we had a number of days together and Dorothy got to know me. Dorothy made the  trip really well! She is a young lady with an outgoing personality and seems to be not afraid of anything. She likes already to carry everything around. I think she will be a good retrieving dog one day.

Meanwhile Dorothy is since a few weeks in Germany. She has grown up and is a mischievious little girl with a great temperament. The following photos show her at the age of almost 7 months in July 2017 (Copyright Ulf F. Baumann). 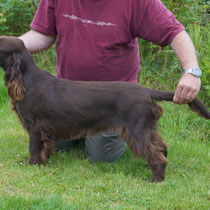 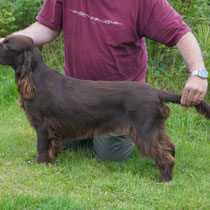 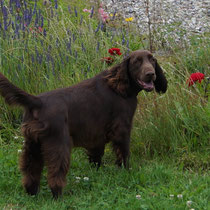 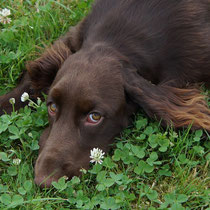